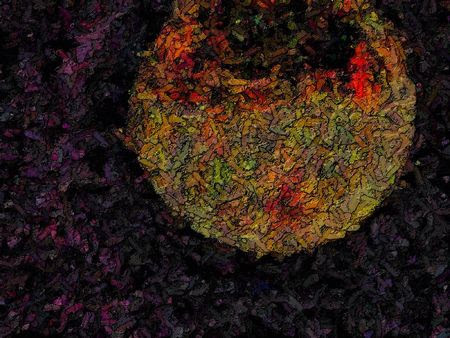 Even 35 years on, our rugged Voyager spacecraft are poised to make new discoveries as we eagerly await the signs that we've entered interstellar space," Voyager results turned Jupiter and Saturn into full, tumultuous worlds, their moons from faint dots into distinctive places, and gave us our first glimpses of Uranus and Neptune up-close. We can't wait for Voyager to turn our models of the space beyond our sun into the first observations from interstellar space.
--Ed Stone, Voyager project scientist at the California Institute of Technology in Pasadena

The photos from Voyager(s) blew my mind as a young adult. For years, I had luminescent shots of Jupiter and Saturn prominently displayed in homes and offices. These were neighbors worth taking the time to get to know.

Both the density and the light became more prominent in the remix. Orginally rendered in XenoDream in 2000, and remixed to the point of eruption.

Posted by cruelanimal at 6:14 PM No comments: 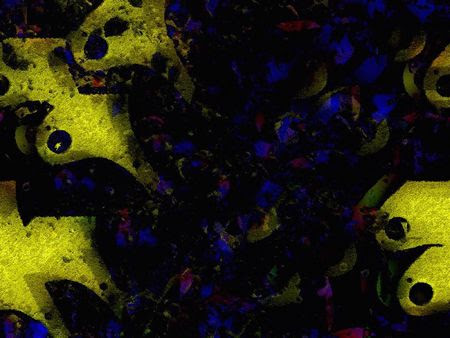 Another remix. Forgive the cognitive dissonence caused by posting this one at the start of the school year. Think of it like viewing a snow fort in the Dog Days.

Aspects of motion and absence were murky in the original, and light at he bottom of the ocean floor suddenly became visible...

This remix expands, then dives deeper.

Cut Down on the Anime Remix 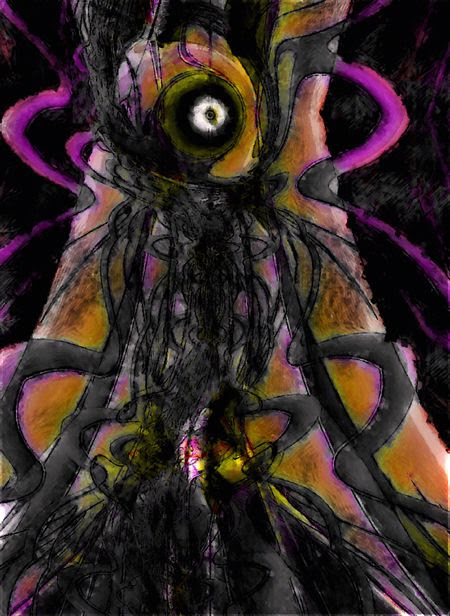 I always liked the rounded, tentacle-like lines in this piece. The eye form reminds me of both the tripods in War of the Worlds as well as cheeseball horror films like The Crawling Eye.

Originally rendered in Sterling-ware in 2002. Remixed until physical characteristics became even more exaggerated. 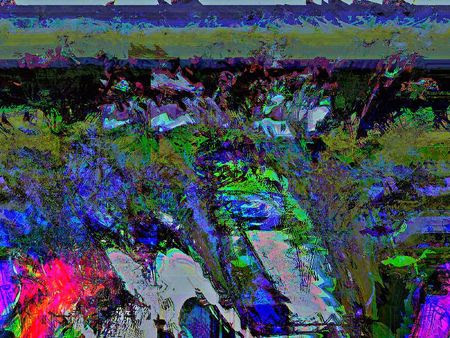 I've been in hibernation much of the summer working on an art project I never thought I'd be able to undertake.

For many years, I've searched for a process to make my earliest work suitable for framing and viable for HD digital display. All of my art created prior to 2003 was produced at a very small scale -- mostly at the size of 800 x 600 pixels. Given the extent that I commonly post-process, the computers I had at the time were not capable of rendering extremely detailed work at a larger scale. Over time, I resigned myself to the fact that all of those early pieces could never be reproduced with enough vibrancy and resolution to do the pieces aesthetic justice. To paraphrase (and distort) Donald Rumsfeld, I went to war (that is, making art) with the technology I had -- not the technology I wish I had.

Wishes, though, as it turns out, can come true. This summer, with a new computer and a software upgrade, I rebuilt my digital studio. Now, I've finally been able to satisfactorily blow up and remix one hundred of those early works. Some of these remixes will appear on this blog in the coming weeks and months.

Digital artists often have a tough go placing their art in real-world galleries. I’ve shaken my head sadly many times while weighing the advantages of a physical original (like a painting or a sculpture) over a digital original, but one advantage the latter shares with digital music is the capability to remix – especially as tools (like a computer) evolve options and expand firepower. To my eyes, the remixes have more resonance and better exemplify what I saw in my head when initially creating these works at the size of a trade paperback cover.

Ironically, although I originally undertook the project to make some early images feasible for printmaking, I found that I spent much more time and attention fine-tuning the pieces with care for how they would appear digitally. As much as I enjoy prints, and have been an advocate for actively making fine art prints of original digital art, I also pine for the day when large-scale, high resolution HD screens will find fittingly representational wall space in brick and mortar art galleries.

I thought the image above might be an appropriate one to start the show. Think of it as beach viewing for the waning days of summer.