Fiends without a Face Weird for the sake of weird...
Moe Szyslak, The Simpsons

We know fractals are said to be supposedly infinite, highly recursive, and sometimes interpreted through aesthetics. But can the exaggeration and irony of camp be one of those aesthetic crash dives?

The critters in this image reminded me of the "monsters" from that psychotronic gem Fiend without a Face.

Another one of those remarkable strings of nuclear accidents in the 1950s unleashes a rash of caterpillaric brainstems snaking through the Canadian countryside and snacking on the locals' left and right hemispheres. Viewer empathy begins to leak into the mix as many of the spine-sucking creatures are dispatched with macho gusto by pistols at point blank range. When shot, their brainstems curl like ribbons, and their cerebrums emit leaking oil sounds as strawberry preserves dribble out of their lobes. Once the bumbling technicians have their skulls drained like unwanted swamps and the responsible nuclear plant is destroyed, each rampaging neck-clinger becomes a literal no-brainer and melts into what looks like bubbling custard. 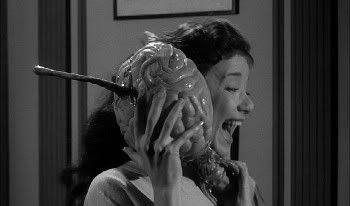 Hi there. You're only the peripheral romantic interest in this film. So you won't actually be needing your brain for this role.

And you thought all you had to worry about were Chernobyl collateral damage and truly infinite waste storage in Yucca Mountain and elsewhere.

I've argued previously on this blog that fractals have attributes associated with fine art. I guess the reverse is true, too. Fractals can also take the low road. As we learn from hey I coulda written that crap on Wikipedia:

Camp has been from the start an ironic attitude, embraced by anti-Academic theorists for its explicit defense of clearly marginalized forms. As such, its claims to legitimacy are dependent on its opposition to the status quo; camp has no aspiration to timelessness, but rather lives on the hypocrisy of the dominant culture. It doesn't present basic values, but precisely confronts culture with what it perceives as its inconsistencies, to show how any norm is socially constructed. This rebellious utilisation of critical concepts was originally formulated by modernist art theorists such as sociologist Theodor Adorno who were radically opposed to the kind of popular culture that consumerism endorsed.

So can fractal art now be considered postmodernist? After all, someone once told me my art(ifact) was "all surface."

And, yeah, I think this post could be seen as a metanarrative...

Until someone totally deconstructs it in the comments...

Image rendered in QuaSZ and mildly post-processed until my brain went missing and I stopped.

Posted by cruelanimal at 8:11 PM 3 comments:

The Bed You Made 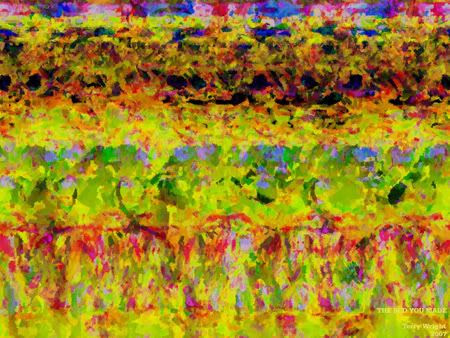 Old expressions from labs of lust
where spliced mice make nests from shredded
paper. Once you take off
your clothes reactions are tested.

You can't go back
and your skin is unlike a sheet
blank and type free. What is written
on your face is a maze

of fear
you run each day. 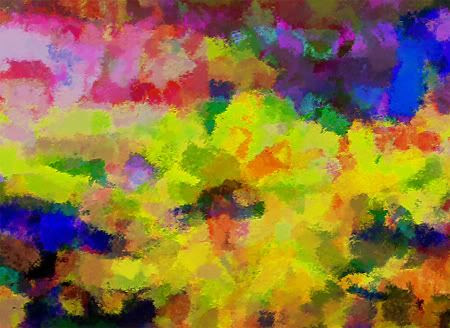 Upper left corner detail of The Bed You Made

Image rendered in Sterling-ware and post-processed until the exercise wheel squeeked and the mattress sagged.

Please note my art web site has a new URL and domain:
Rooms with a View
http://wrightart.net 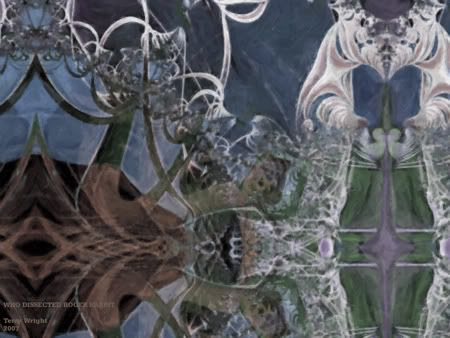 The function of art is to disturb. Science reassures.
--Georges Braque

Andrea Yates believed that cartoon characters told her she was a bad mother who fed her children too much candy...
--Court TV News

For some reason, disembowelment and bloodshed is a helluva lot funnier when it's animated. We have no idea why. It's just the way it is.
--Atom Films

This image has, well, guts.

There's been quite a bit of talk on this blog about breaking the traditional assumptions that fractal art is grounded in an aesthetics of beauty. Fractals are abstract. So how can they "mean" anything? And, if they are non-referential, does this imply they can only be wildly pleasing to the eye? Exhibit A: Another saturated spiral explodes from its slick paper as one turns over each new month in a Fractal Universe calendar.

Still, there has also been plenty of talk here lately about "ugly" fractals. Fractals "with dirty faces." Fractals that refuse to be eye candy. Fractals that assault rather than soothe the senses.

Is my image today in bad taste? Or merely a comment on the exaggerated violence found in many cartoons. After all, a far worse fate usually awaits Tom in every Tom and Jerry short. Lawnmowers shaving him from tail to skull. A falling iron transforming the top of his head into a landing strip.

One of Tex Avery's whistling wolves getting smashed with a frying pan that turns his face into a dinner plate is funny. Cartoon characters whispering to Andrea Yates and telling her to drown her kids in a bathtub is not funny.

And fractals, as art, can steer viewers either way.

So is my image today disturbing? Or as funny as being pulverized into an accordion shape by a falling anvil? Or is it just silly or pretentious or bland. Whatever. You -- the viewer -- get to decide.

But I'm betting it's not pretty. 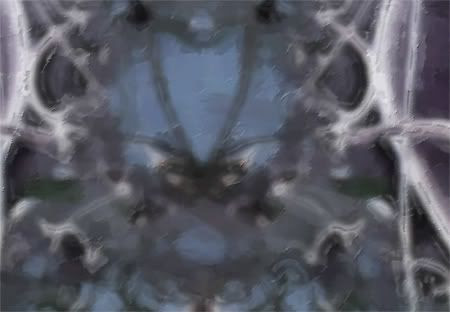 Image made with Sterling-ware and post-processed until I chased it off a cliff, waved goodbye, and disappeared downward leaving only a small cloud of smoke behind.

Rooms with a View. Please note the new address. Here's why I was forced to move.