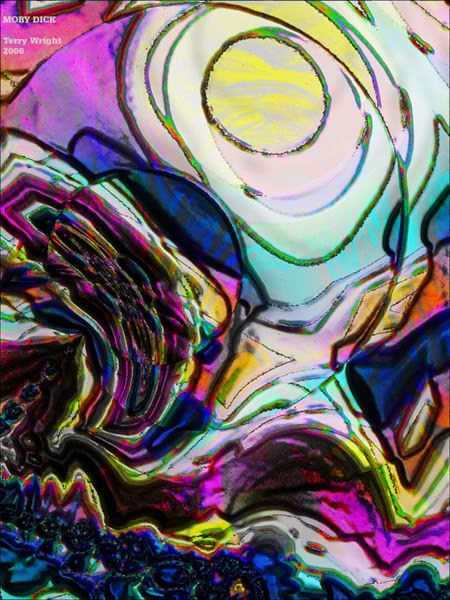 I've fallen a little behind in my posts lately as work has left little time for blogging or living. I hope to get back on track this week.

Today's post is something colorful and new. I assume most readers are familiar with Melville's classic about obsessive-compulsive Captain Ahab and his pursuit of the great white whale Moby Dick. Or, at least the movie with Jean-Luc Picard Gregory Peck. Or, perhaps, the drums-saturated song by Led Zeppelin. Today, though, I'm interested in more contemporary applications of Melville's metaphor.

From CounterPunch -- "Remember the Pequod" by Brendan Cooney:

One hundred fifty years before the U.S. went hunting in Afghanistan, Herman Melville published the most famous American hunt story, a novel that might be seen today as a cautionary tale against foolish chases -- Moby Dick. Captain Ahab uses the same psychological strategy as President Bush's "dead or alive" rhetoric when he announces to the crew of the Pequod that the ship now has but one mission: to kill Moby Dick, the horrible White Whale who bit off his leg years before. No longer is the voyage about making money from commercial whaling. It is now a quest for retribution. Ahab must know that if he presents the challenge of a hunt -- especially for revenge -- the men will forget why they came along in the first place, and that their human urge for the hunt would take over. The gauntlet Ahab throws down to his crew is precisely the one Bush flung upon the world: you're either with us or against us. Adrenalin seizes the crew. They take an oath to hunt the whale. The ship sinks. Everyone dies except Ishmael, the narrator.

The narratives bear other striking similarities. Like the United States suffering the loss of its towers and the people in them, Ahab's body and pride were wounded when the White Whale "dismasted" him in its ivory jaws (Chapter 36). In a mad rage Ahab redirects his crew, which hails from all over the world and is joined in the ship on the economic mission of hunting whales for profit, to a course of violent revenge, just as the United States has redirected a group of countries already joined under its economic stewardship onto a quest to restore its pride.

Both missions, of course, are doomed. Ahab never has a chance against Moby Dick, a force of nature that most sea captains know it is not their business to mess with. Similarly, the United States has no hope in its stated goal of eliminating terrorism. Whoever hates America can always find a way to attack it. To eradicate terrorism therefore would be to wipe out antipathy against America, a human sentiment that most leaders would recognize cannot be controlled. America's means of effecting that change-dropping bombs on innocent people in one of the world's most destitute countries-can hardly be more effective than having done nothing at all.

William Faulkner wrote in the Chicago Tribune in 1927 that his fascination with Moby Dick was that it showed a man "bent on his own destruction and dragging his immediate world down with him with a despotic and utter disregard of [its people] as individuals."

To some extent, any war necessitates a blindness to the individuality of the people being attacked. The U.S. would not have bombed Timothy McVeigh's neighborhood to get him the way it bombs Afghan villages to get bin Laden. It is easier to ignore humanity on foreign soil. But, as Faulkner points out, Ahab is disregarding his own people in taking his ship down with him. Likewise, as hatred of America surely will intensify around the world in reaction to U.S. terrorist-hunting, Bush is taking all of us down with him. 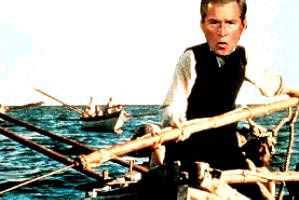 It seems quite a few writers fret that George W. Call Me Bushmael has contracted Ahab-itis. Like Ross Levine at Morphizm:

But then came September 11.

Suddenly, overnight, a mealy-mouthed leader named George Bush went from usurper to crusader. The white whale had bitten his leg off, and now our West Wing Ahab was determined to avenge his injuries. It was to be a "war against terrorism," he declared. The U.S. would be "steadfast, and patient, and persistent" as it hunted down the evil agents of the evil axis in caves, in INS files, in presidential palaces, wherever such malefactors might be lurking. It was described as a "campaign [that] may not be finished on our watch -- yet it must be and it will be waged on our watch." We must "fight freedom's fight" against -- against evil itself, the rhetoric went, a war to make the world -- what? Evil-free? A utopia? A veritable Reich of righteousness.

Even Ahab never sounded quite so messianic. Didn't the Nazis already prove that you can't perfect humanity? That if you kill in the name of a perfect society, you're not getting off to a very good start? But we're not Nazis, we're Americans. We have a special place in the world. We're always the good guys, and when we do slip up, it's not our fault, it's -- well, the government's. They're the ones who carpet-bombed Viet Nam and poisoned Nevadans with radiation and let African Americans die of venereal disease.

You cannot -- repeat, cannot -- fight a finite war against terrorism. The definition of terrorism is a matter of perspective. It's like fighting a war against crime, a battle police departments wage every day with the understanding it will never end. Unless one is truly delusional, it's impossible to believe otherwise. 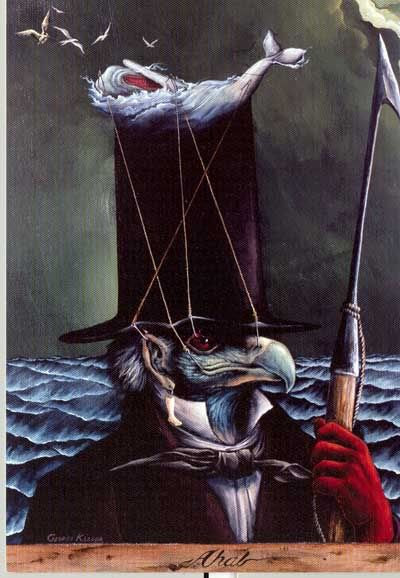 And, finally, like the recent Gospel of Judas, a lost Melville manuscript featuring Moby Dick outtakes has been found deep in Davy Jones Locker. From Watching the Watchers:

"What do the charts say?" he barked at Starbuck.

"Then the charts are wrong," the Captain said with a sneer. "I owe it to the passengers on this mighty ship to steer this vessel on a straight and true course. It would show weakness to the enemy if I were to veer from the course I've set us upon just because the charts say we're not going the way THEY say we should be."

"The WHALE," the Captain snapped. "Moby Dick would LOVE it if I were to change course, admitting I've made a mistake. The passengers would never forgive me. I've sworn to PROTECT the passengers from this foul whale who wants only to kill them."

"But Cap'n," Starbuck said, "the passengers believe the charts are correct! Only 38 percent of them think this cruise has been a success, and 52 percent think you're a failure as a Captain!"

"This whole act's immutably decreed. 'Twas rehearsed by thee and me a billion years before this ocean rolled. Fool! I am the Fates' lieutenant; I act under orders. And THAT'S why we can't veer from this course, you fool!" the Captain barked. "You are only giving aid and comfort to the WHITE WHALE with that kind of talk! Steady and true as she goes!"

"Cap'n, I'm not entirely sure you understand," Starbuck said. "These figures are distressing! Fifty-three percent of the passengers think you lied about the whale in the first place! Fifty-one percent say they favor replacing current crew members with crew members who would openly oppose you! Sixty-two percent of them say they believe this ship is going the wrong way! And a full 64 percent of them believe that conditions on this ship have only gotten worse in the five years you've been skipper!"

"I will not harbor such mutinous blather," the Captain shouted, motioning towards Gonzales, the Master at Arms. "Clap this traitorous scum in irons, Bertie," the Captain said with a malicious grin.

"Aye, Cap'n," Gonzales said, clouting Starbuck with a stout billy club. "Shall I apply the usual hood, poncho and electrodes as well?"

"Belay that torture talk, Bertie," the Skipper responded. "The passengers may hear of it and find it distressing."

Sometimes, I feel a little Ahab myself. Whenever Bush's smirk floats by on my television screen, I usually have this reaction:

To the last, I grapple with thee; From Hell's heart, I stab at thee; For hate's sake, I spit my last breath at thee.

And I know it's probably time for me to go below and change the channel to a kung-fu film.

Woven together with brilliance! Thank you.

Just like the Led Zep song, the book is pretty long. I never got beyond the first chapter. Even Classics Illustrated was too much.

I think some books can be boiled down to a few "boney" ideas, like Ahab's obsession. Fortunately, that's what you hear most people talking about. So maybe I can say I've read Moby
Dick now.

That ought to get me at least a D+

Thanks, Cyndy. Glad to see you here again.

Tim, you crack me up. Is Bonham's solo really almost as long as Melville's novel?

Here is the condensed version of Moby Dick taken from Book-a-Minute.

Now you won't have to read it:

Captain Ahab: Crew, we will seek the white whale and kill it, because I am insane.

Crew: Alas, your destructive obsession will be our undoing.

(Everybody dies except Ishmael, although this is no surprise, because it was foreshadowed CONTINUALLY from the BEGINNING.)

High-quality, limited-edition, paper and canvas prints are available for most images. Please email me for more information.

To see more of my artwork, please visit Rooms with a View