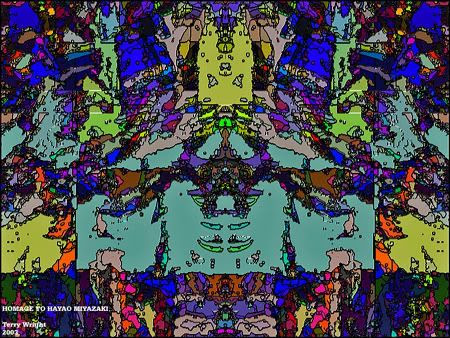 From draw your own conclusions Wikipedia:

Miyazaki is the creator of many popular anime feature films, as well as manga. Although largely unknown in the West outside of animation circles until Miramax released his film Princess Mononoke in 1999, his films have enjoyed commercial and critical success in Japan and East Asia. Miyazaki's Spirited Away is the highest-grossing film of all time in Japan; Princess Mononoke held the same title for a short period until the release of Titanic later in the same year.

Miyazaki's films are distinguished by recurring themes such as humanity's relationship to nature and technology, and the difficulty of maintaining a pacifist ethic. The protagonists of his movies are often strong, independent girls or young women; the "villains" are often ambiguous characters with redeeming qualities.

Miyazaki's films have generally been financial successes. His success has invited comparisons with American animator Walt Disney. However, Miyazaki does not see himself as a person building an animation empire, but as an animator lucky enough to have been allowed to make films with his own personal touch.

Flight by the characters is a very common occurrence in Miyazaki's films, lauded for their ability to often look very natural and not "forced". Examples include Nausicaä piloting Mehve, Kiki riding her broomstick, Totoro carrying Satsuki and Mei across the night sky, Howl and Sophie floating majestically above the town of Market Chipping, or Chihiro being borne by Haku in dragon-form back towards the bathhouse of the spirits to find her parents.

His films are visual stunners. When my daughter was young, I remember watching My Neighbor Totoro with her over and over again -- and each time new pleasures and secrets were revealed.

Posted by cruelanimal at 9:30 PM

Terry! It was great to see you the other week at the Neil Gaiman reading (I was with my sister Jessica). Miyazaki is a genius, I think my wife and I watch "Spirited Away" at least once a week.

Anyhow, glad to find your blog.

Yes, I remember you. Thanks for taking the time to stop by.

As I said, I started watching Miyazaki with my daughter when she was about eight -- and I've gone on to seek out and buy everything I can find. I'm grateful that Disney has recently released so many of his titles on fully-loaded DVDs. And, yes, "Spirited Away" is one of the very best in his canon.