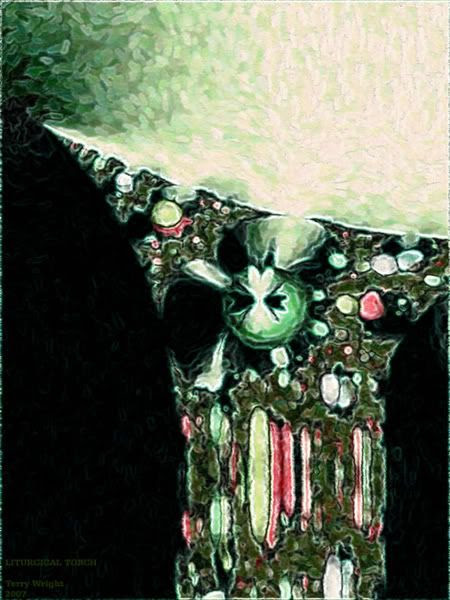 Tim Hodkinson over at Orbit Trap shines light into the darker corners of this year's Benoit Mandelbrot Fractal Art Contest.

You might recall I wrote about this same contest earlier this summer and raised a few points questioning the propriety of its operation. My writings led to spirited discourse with the contest's director that culminated in this very revealing email exchange. In the end, he denied me access to my own web site that I paid him to host on his server. As a result, I was forced to move my web site to a new host and domain. Given the level of vindictiveness displayed toward me, I admire Tim's courage for also speaking up. That's why I'm inviting my readers to hear Tim out.

He suggests the contest is designed to showcase a specific fractal software program and the artists who use it:

First off, it ought to be perfectly obvious to anyone who reads the rules that the Benoit Mandelbrot Fractal Art Contest is ultimately going to result in an exhibition made up of highly polished work made in Ultra Fractal. It's there. It may not be intentional, but if you ask the question, "Why?" (and you should always ask that), the answer is plain: those are the attributes that they think makes good Fractal Art.

The required image sizes alone immediately narrow down the possibilities. Check out the names of the judges and see the sort of work they produce online and you'll get an even clearer view of where this contest is leading. Check out last year's results. That's the sort of artwork this contest is all about and was directed, by design, to be.

Tim also questions the appropriateness of inviting the judges to have their own work hung in the exhibition beside the works of "winning" artists:

If you read carefully you'll also realize that the "exhibit" is not the same as the contest results. The "exhibit" is made up of two groups of work: the contest winners and the judges own, self-selected work that is not judged, but is included with the contest winners for reasons I still can't understand, although it may have been a half-baked idea -- the first year. Why have a "contest" and then add unjudged work to it? Why is it considered a conflict of interest for the judges to submit their own work to the selection committee, but not when they select it themselves and have it automatically included in the exhibit? (Rules 2.1) Why not simply have the judges submit their work like everyone else, but abstain from voting on it? Or just not submit anything at all?

Tim reserves his most direct criticism for the contest's judges:

Why separate [the judges'] work from the contest? As I mentioned, contests set standards and make statements about what is good (selected) and what isn't (unselected). Conflicts of interest regarding selection undermines that standard and in the extreme case, invalidates it on the grounds that motives other than artistic quality influenced the selections. Pretty simple reasoning, don't you think?

This is the achilles heel of the contest and it ought to be eliminated because it's insulting to the judges as ultimately it makes them look like they're cheating and using the exhibit to present their own artwork under the guise of having received critical acclaim (ie. selected by the judges -more than one) when in fact it only reflects their personal choice (one judge). They're all respected fractal artists. They don't need this private, back door to the exhibit.

If you're interested in fractals and fractal art, Tim's entire essay is well written and worth your time.

Posted by cruelanimal at 6:35 PM

At a Flooded Graveyard in Findley, Ohio

Whom no one remembers
every one hundred years
a surge engulfs, down to
the coldest of bones.

Some stones get so harsh
a scrubbing that pumice
flakes off and steel rods
bend like willow reeds.

We're too far north
for voodoo, but this flood
makes rowboats of us sinners.
Who's crazy now?

Nothing can shut down
a university, not even
orders from the Corps
of Engineers.

The fishy smell has gotten
out of hand, I'm sorry, and
the gynecologist refuses
to cut off the fins.

Is there fairness in beauty? No
matter which choice you'd make,
without power or money, it's all
just worthless art.

Another nice poem from you.