My father once told me that this was his favorite image of mine. He said he liked the detail in it. I'm putting it up today just for him.

I'm not sure what he saw in it. I never thought there was anything special about it. It's just something that popped out of Tiera-Zon one afternoon when I was first exploring fractals. I was just beginning to have mysterious vertigo attacks at the time -- hence the title. Later, I was diagnosed with Meniere's Disease -- which explained my increasing bouts of dizziness and hearing loss.

My father visited my web site often, and he often expressed an interest in my art. Once he retired, he'd meet his morning coffee buddies and sometimes tell them about my fractals. They'd ask him what fractals were -- and how I made them. He said he wasn't exactly sure what fractals were, and he'd almost always add: I have no idea how he does it.

My father passed away in his sleep last week.

I'm really going to miss him in so many different ways -- including hearing what he'd think about my recent art work.

Like others of the "greatest generation," he served his country during WWII on both Peleliu and Okinawa. He lived with my mother for 56 years. He raised six children. He wrote poetry. Even after suffering a stroke several years ago, he volunteered at his local hospital in order to help others.

I often admired him -- but never so much as when I became a father myself. Many times, as my mind reeled with the complexities of raising a child, I asked the same question -- just as I do now that he is gone:

With apologies to Marcel Duchamp...

Unless the splash park is now the new royal ball...

Made with Sterling-ware and post-processed until I lost my trunks and water went up my nose.

Posted by cruelanimal at 7:53 PM 3 comments:

…you should be asking -- asking now that Version.2006 has a year of dry paint and Version.2007 has just rolled its wet pixels off the assembly line-- asking before you start your generators and begin revving your fractals for next year’s Version.2008:

~Why is the judges' work exhibited with that of the winners? Isn't this breach of universally accepted protocol in itself enough to invalidate the entire contest? Can viewers easily know which artists were self-selected and which were juried? In other words, are distinctions between judges (who this year are semantically disguised as “panel members”) and winners thoroughly and consistently made obvious -- at the exhibition in Madrid, in every online gallery, and in all promotional materials? Who made the decision to allow the judges’ work to be shown with the winning art? Who selected the judges, and what criteria were used to make the choices? And what is one to make of the 60/40 ratio in this year’s exhibited work ( Winners: 15 / Judges: 10)? Is this whole thing really a competition at all -- or is it more of an invited exhibition where the judges walk their own work in through the delivery door and hang their art (with apparently no shame) beside the winners? How can anyone then tell the winners from the choosers? Shouldn't this competition be either a juried contest or a by-invitation-only exhibit -- but certainly not both?

~What percentage of the exhibited images (including art from the judges) from both last year and this year were created using Ultra Fractal? Over 75%? Higher? Don’t these numbers suggest the competition is just a facelift of the old Fractalus art contests dressed up in formalwear to better glitter for the press, seem more cosmopolitan to the viewers, and appear more inclusive and broad-based to the artists? But, if this actually is a retread in new duds and on steroids primarily designed to pump up UF art and artists, shouldn't all the contest’s promotional and advertising materials make that fact explicit?

~Why is the submission size for entries so large when the director surely understands that artists using programs other than UF, as well as artists who post-process heavily, would face obstacles that could easily exclude them from competing? Why, in fact, do all prints have to be made to the specifications of doors and picture windows, as clearly seen in this short video piece about last year’s contest found on YouTube? Is bigger always better to display fractal details? Do we need to blow up the Mona Lisa or The Scream to plasma TV dimensions to “improve” them? Wouldn’t an exhibition of prints of an assortment of sizes be just as elegant and even more aesthetically pleasing? Or are the titanic entry requirements intentionally mandated to insure a certain fractal program (guess which one) is emphatically privileged?

~How many of the winners, alternates, and honorable mentions are now taking or have taken classes from contest judges who teach art students at the Visual Arts Academy? Did one of the judge’s students report her two entries were recognized in the contest-- one as an alternate and the other as an honorable mention? Did another student selected for the exhibition note her his winning entry was created as a masking exercise in one of the judge’s classes? Did these judges recuse themselves from passing judgment on entries they recognized as being from their own students? Moreover, were any safeguards put in effect to insure judges refrain from making a recommendation when they recognized a friend’s work? Aren’t such reasonable guidelines commonplace protocols in literary and art contests? Here is an excerpt from the entry requirements of the annual literary contest held by the Associated Writing Programs:

How can the people responsible for the contest not see such an inherent conflict of interest? And doesn’t a situation where winners are thanking other winners for their formulas and where students are selected for inclusion by their teachers run an increased risk of presenting an exhibition showcasing a single, inbred, highly homogenized style?

~Isn’t Professor Mandelbrot generally considered to be the father of all fractals? Did he know that the work exhibited under the auspices of the "contest" that bears his name caters to the UFractalus school and is nowhere near a representational sampling of the current, multi-dimensional breadth of contemporary fractal art? Would he maybe prefer "his" contest to display more diversity in its range of fractal styles, programs, forms, and visions?

~And, in the end, isn’t the Benoit Mandelbrot Fractal Art Contest just a publicity stunt by the director and the judges to concoct a “prestigious” contest out of whole cloth and gild it with a veneer of juried rigor? Isn’t it both a sham and a scam that allows their own work never to risk the uncomfortable scrutiny of being judged itself -- but to instead be safely grandfathered into an exhibition of their own creation?

Posted by cruelanimal at 1:40 PM 2 comments:

Happy birthday to Sonny Rollins -- one of my favorite jazz musicians. He's 76 today.

Made with Fractal Zplot and post-processed until it slipped away into improvisation.

Tim Hodkinson over at Orbit Trap shines light into the darker corners of this year's Benoit Mandelbrot Fractal Art Contest.

You might recall I wrote about this same contest earlier this summer and raised a few points questioning the propriety of its operation. My writings led to spirited discourse with the contest's director that culminated in this very revealing email exchange. In the end, he denied me access to my own web site that I paid him to host on his server. As a result, I was forced to move my web site to a new host and domain. Given the level of vindictiveness displayed toward me, I admire Tim's courage for also speaking up. That's why I'm inviting my readers to hear Tim out.

He suggests the contest is designed to showcase a specific fractal software program and the artists who use it:

First off, it ought to be perfectly obvious to anyone who reads the rules that the Benoit Mandelbrot Fractal Art Contest is ultimately going to result in an exhibition made up of highly polished work made in Ultra Fractal. It's there. It may not be intentional, but if you ask the question, "Why?" (and you should always ask that), the answer is plain: those are the attributes that they think makes good Fractal Art.

The required image sizes alone immediately narrow down the possibilities. Check out the names of the judges and see the sort of work they produce online and you'll get an even clearer view of where this contest is leading. Check out last year's results. That's the sort of artwork this contest is all about and was directed, by design, to be.

Tim also questions the appropriateness of inviting the judges to have their own work hung in the exhibition beside the works of "winning" artists:

If you read carefully you'll also realize that the "exhibit" is not the same as the contest results. The "exhibit" is made up of two groups of work: the contest winners and the judges own, self-selected work that is not judged, but is included with the contest winners for reasons I still can't understand, although it may have been a half-baked idea -- the first year. Why have a "contest" and then add unjudged work to it? Why is it considered a conflict of interest for the judges to submit their own work to the selection committee, but not when they select it themselves and have it automatically included in the exhibit? (Rules 2.1) Why not simply have the judges submit their work like everyone else, but abstain from voting on it? Or just not submit anything at all?

Tim reserves his most direct criticism for the contest's judges:

Why separate [the judges'] work from the contest? As I mentioned, contests set standards and make statements about what is good (selected) and what isn't (unselected). Conflicts of interest regarding selection undermines that standard and in the extreme case, invalidates it on the grounds that motives other than artistic quality influenced the selections. Pretty simple reasoning, don't you think?

This is the achilles heel of the contest and it ought to be eliminated because it's insulting to the judges as ultimately it makes them look like they're cheating and using the exhibit to present their own artwork under the guise of having received critical acclaim (ie. selected by the judges -more than one) when in fact it only reflects their personal choice (one judge). They're all respected fractal artists. They don't need this private, back door to the exhibit.

If you're interested in fractals and fractal art, Tim's entire essay is well written and worth your time.

Posted by cruelanimal at 6:35 PM 2 comments: 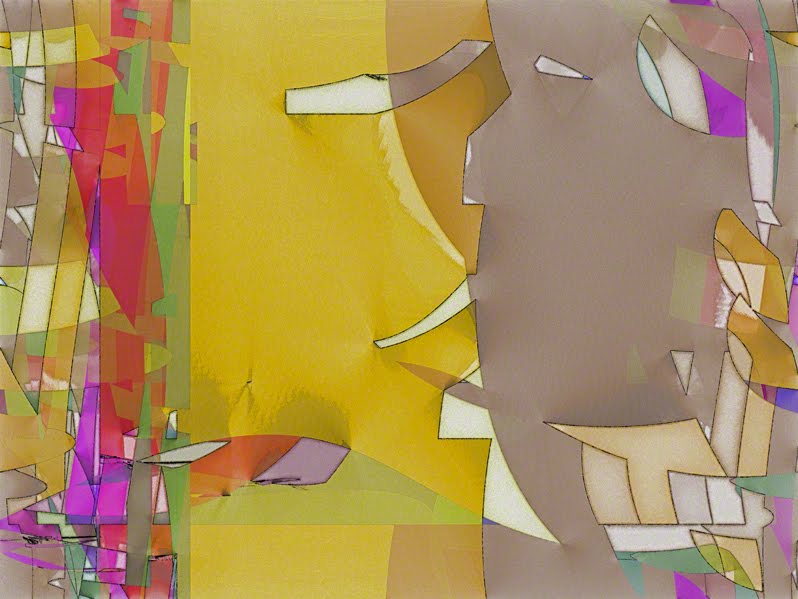 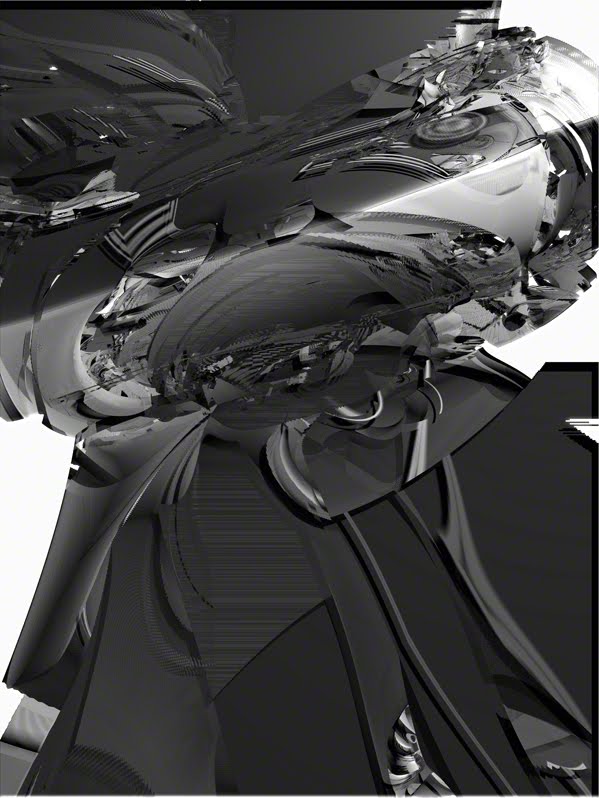 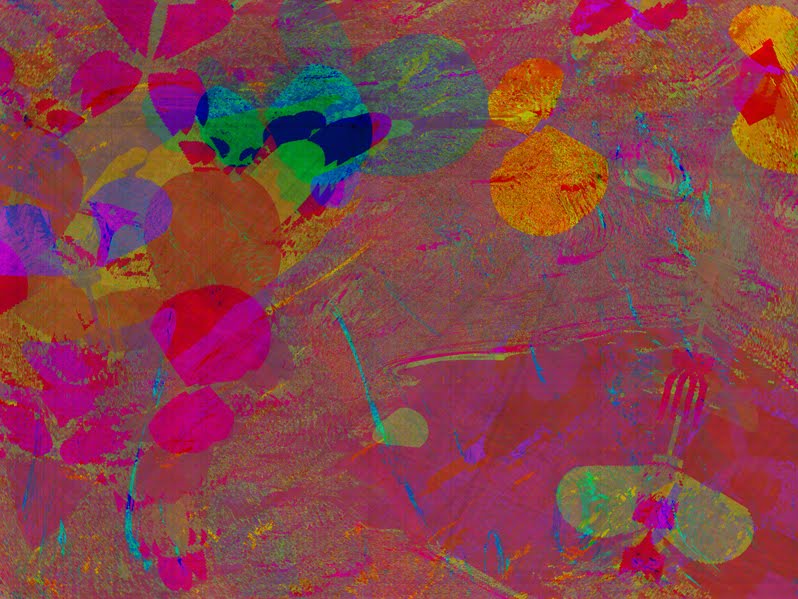 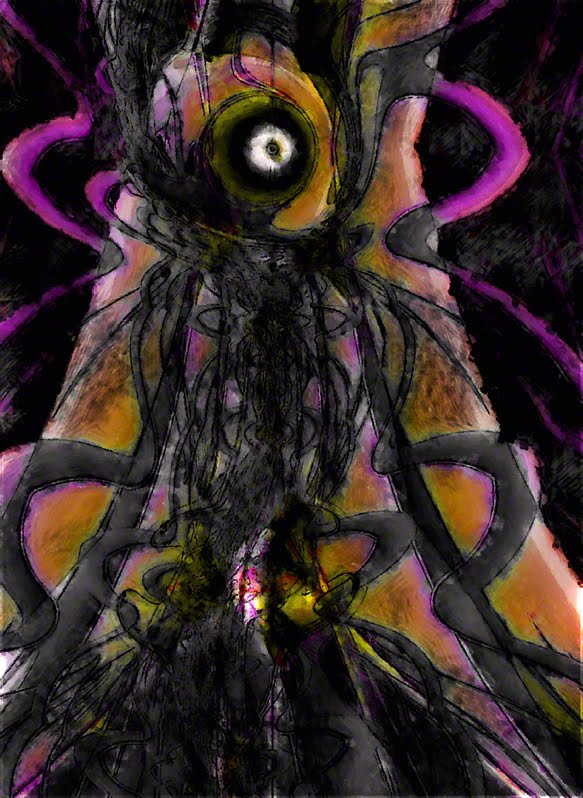 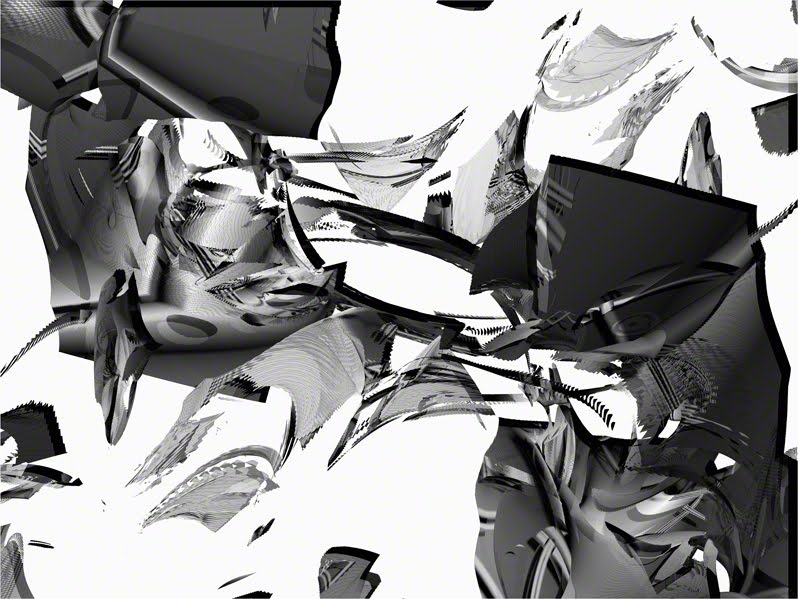 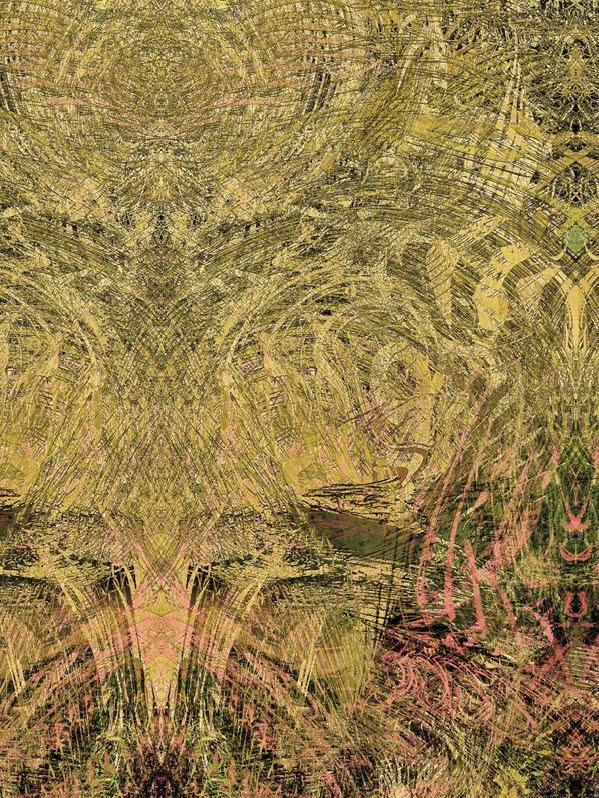 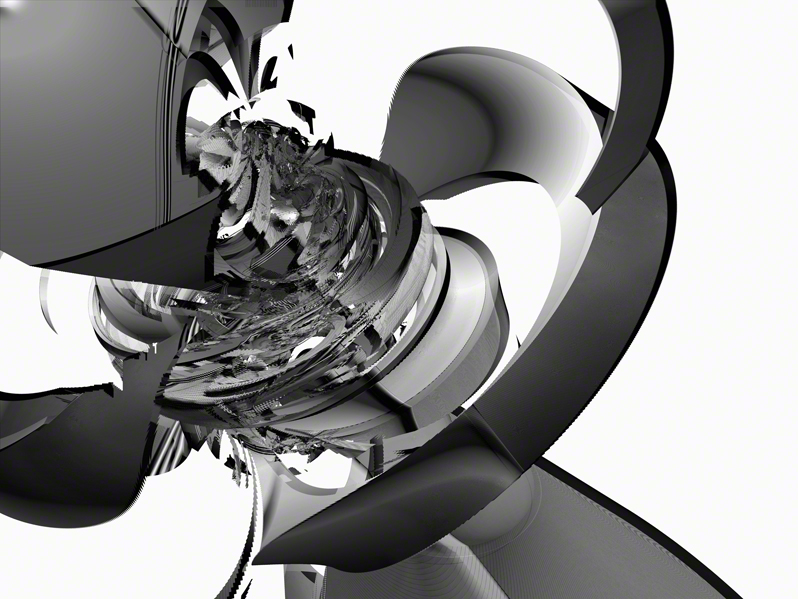 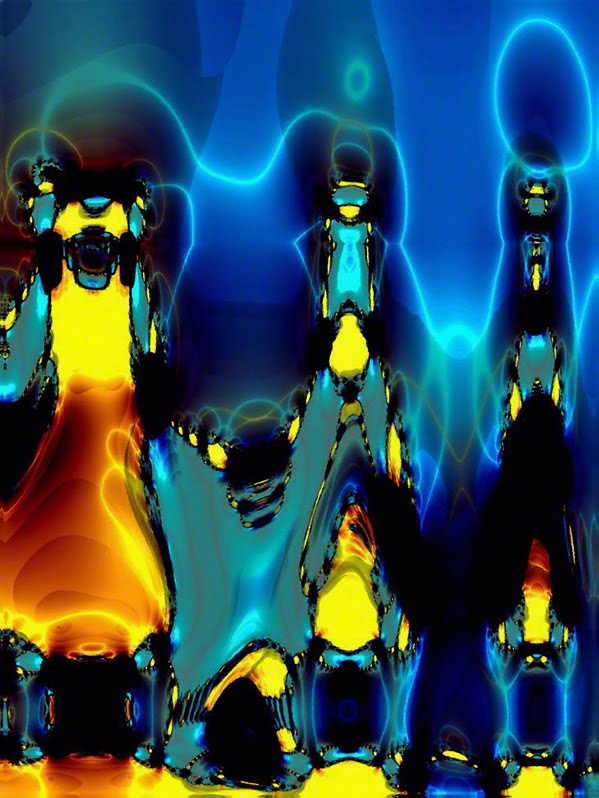 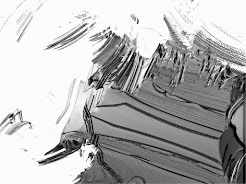