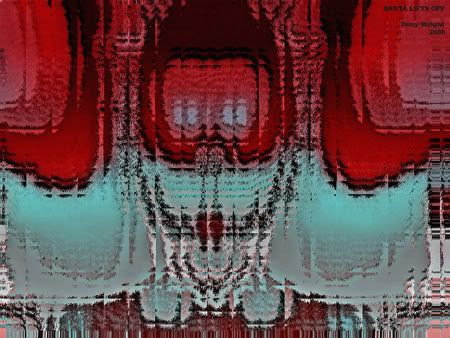 He's on his way -- at least according to the grapevine of Bush-authorized wiretaps. No wonder the guy's suspect. He gives to the poor. Never downsizes. Never outsources. No Enron creative accounting. No kickbacks from the toy lobby. Santa can't be a Republican -- especially after an infraction like this:

If the anti-Christmas forces are winning, then the war in Iraq is nothing short of total victory. -- Ruth Marcus

By the way, my Christmas stocking is getting heavier. As seen on MyDD, Barron's, a bigtime big business magazine, has called for impeachment hearings on Bush for criminal wiretapping infractions. Here's my favorite part:

Willful disregard of a law is potentially an impeachable offense. It is at least as impeachable as having a sexual escapade under the Oval Office desk and lying about it later. The members of the House Judiciary Committee who staged the impeachment of President Clinton ought to be as outraged at this situation. They ought to investigate it, consider it carefully and report either a bill that would change the wiretap laws to suit the president or a bill of impeachment.

I'm down with that. BushCo loves these you're-either-with-us-or-with-the-terrorists polarized dichotomies. So let's pitch this black and white worldview back into Torquemada's Bush and Cheney's laps. Congress should either vote to explicitly grant the President unlimited, warrantless snooping on American citizens free of judicial wrist slaps (and then see how voters enjoy enabling their government to edge further into old school KGB spying) -- or, Congress should immediately begin impeachment hearings for the most heinous Constitutional violations by an administration since Richard Nixon. Okay, Judiciary Coms. Mull that either-or voice vote over your egg nogs and yule logs.

And that's what I call hearing such a clutter...

Drop by Agitprop. Blogenfreude's on top of the absurd "War on Christmas" hooey.

Posted by cruelanimal at 2:59 PM

I see a tarantula dressed as Santa. Hmmmn, that would make a great movie: Venom of Santa. The bad kids don't get lumps of coal, they end up in a huge web at the North Pole.

But you know, Santa is the original surveilance king:
"He sees you when you're sleeping, He knows when you're awake, He knows if you've been bad or good..."

Actually, given the current price of heating oil, I asked for lumps of coal in my stocking this Christmas.