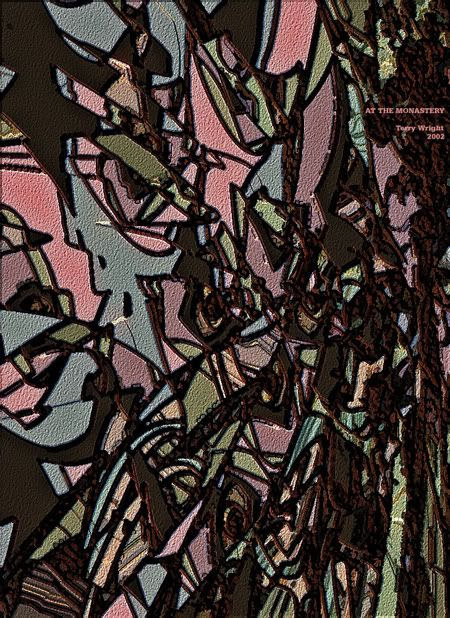 Will Alberto "Torquemada" Gonzales have to quit the High Church of BushCo and enter a private-life monastery to atone for his multiple lapses of moral and legal chastity. The calls for excommunication hark the herald everywhere. From Editor and Publisher:

The Sacramento Bee:
"We haven't seen a renegade U.S. Justice Department like this since John Mitchell ran it for President Nixon. With a new Congress beginning to exercise serious oversight, the problems at the Justice Department and with its leader, Attorney General Alberto Gonzales, are becoming clearer by the day. And what is becoming most clear is that Gonzales must go."

The Philadelphia Inquirer:
"U.S. Attorney General Alberto R. Gonzales should resign. If he ever does, the nation could take it as a clear sign that President Bush finally grasps the need to preserve core civil liberties while guarding against terrorism."

The Buffalo (N.Y.) News:
"He should go. The country needs an attorney general who wants to uphold the law, not subvert it."

From Florida Today in Melbourne:
"He should be removed and replaced with someone willing to protect the Constitution. Chances are Bush won't do that."

The Courier-Journal in Louisville (KY.):
First, [President Bush] should fire Attorney General Alberto Gonzales. Whether Mr. Gonzales is the instigator of this travesty or merely the unprincipled executor of White House political demands, this debacle is further evidence of his insuitability for his critically sensitive post. Then, the president can answer this question: If the eight prosecutors were dismissed for failing to respond to Republican political concerns, can Americans assume that his other U.S. attorneys do fulfill a partisan agenda?"

The Washington Post:
"Now that the political costs are higher than the administration could have imagined, now that senior officials have squandered their claim to credibility, it is imperative that the entire story of the firings be uncovered. As we have said previously, the administration is entitled to prosecutors who reflect its policies and carry out its priorities. It is not entitled to treat federal prosecutors like political pawns -- nor is it entitled, any longer, to the benefit of the doubt about the propriety of its conduct."

The Los Angeles Times:
"We opposed Gonzales' nomination to be attorney general two years ago, arguing that the nation's top law enforcement job should go to someone who understands the limits as well as the power of the law, and someone who understands that his loyalty is to the Constitution as much as it is to the president. Gonzales' atrocious performance as White House counsel, when he enabled far too many shortcuts in the war on terror, was ample reason to disqualify him for attorney general.

This attorney general is loyal to a fault to Bush. He is too loyal to be an effective lawyer, causing the president harm both when he worked at the White House and now that he oversees the Justice Department."

Pull up that hood. Cinch that waist. Let the self-flagellating commence.

But wait. Don't get your rosary beads in an uproar. What did the infallible one decree? From the Associated Press:

Bush, at a news conference in Mexico, told reporters when asked about the controversy: "Mistakes were made. And I'm frankly not happy about them."

But the president expressed confidence in Gonzales, a longtime friend, and defended the firings. "What Al did and what the Justice Department did was appropriate," he said.

What was "mishandled," Bush said, was the Justice Department's release of some but not all details of how the firings were carried out.

I see. It's just the faulty method -- not the perpetual madness.

And. Hey. Frankly. I, too, am unhappy that "mistakes were made." Now where have I heard that phrase before? From zealots and crusades of yesteryear? Oh yeah: 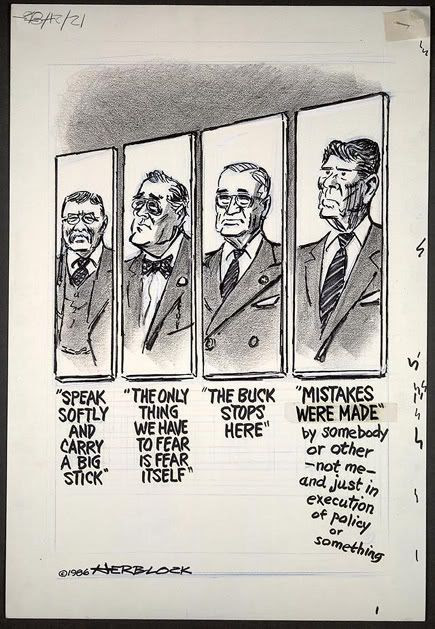 Let's review, class. Mistakes aren't made. They are just mishandled.

[Cartoon by Herblock and seen here.]

So get set for some real March Madness as the House and Senate Judiciary Committees gear up for hearings with blasphemous bloviating and holy writ subpoenas enough for everyone. Get out the hairshirts and fill in your brackets. Will Bush allow his aides to testify under oath? (Does the Pope wear a cowboy tall hat?). And, if aspects of this case actually go to court, won't Gonzales then have to appoint a U.S. attorney to handle the case?

No problemo. Surely there are a few Rove toadies like Tim Griffin left who haven't yet been farmed out to do the devil's work.

Posted by cruelanimal at 7:48 PM