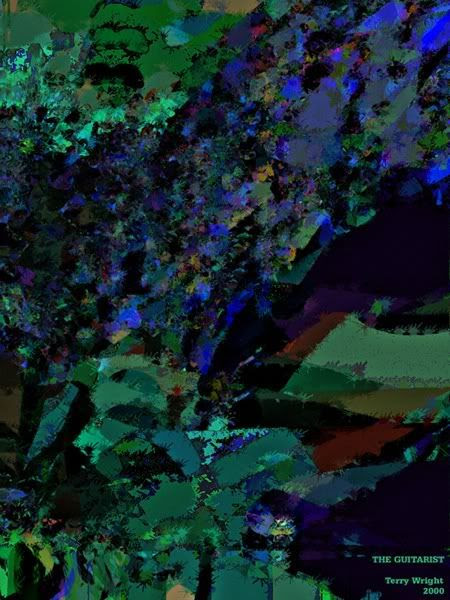 From Guitarsite.com on the influence of Jimi Hendrix:

In his brief four-year reign as a superstar, Jimi Hendrix expanded the vocabulary of the electric rock guitar more than anyone before or since. Hendrix was a master at coaxing all manner of unforeseen sonics from his instrument, often with innovative amplification experiments that produced astral-quality feedback and roaring distortion. His frequent hurricane blasts of noise, and dazzling showmanship -- he could and would play behind his back and with his teeth, and set his guitar on fire -- has sometimes obscured his considerable gifts as a songwriter, singer, and master of a gamut of blues, R&B, and rock styles.

Widely recognized as one of the most creative and influential musicians of the 20th century, Jimi Hendrix pioneered the explosive popularity of the electric guitar. Hendrix's innovative style of combining fuzz, feedback and controlled distortion created a new musical form. Because he was unable to read or write music, it is nothing short of remarkable that Jimi Hendrix's meteoric rise in the music took place in just four short years. His unique musical language continues to influence a whole host of modern musicians, from George Clinton to Miles Davis, and Steve Vai to Jonny Lang.

What would possess us to compile the worst guitar solos in history? I mean, come on, it's no great feat to list the best guitar solos ever. Just put Hendrix, Page, Clapton, and Gilmour in the Top 10 and everyone's happy. It's obscuring reality somewhat, but it's convenient.

The worst guitar solos, on the other hand, don't get talked about much. I know I left out plenty of deserving guitar dudes on this list (there's a lot of hammered shit out there, y'know). I took care to exclude bozos like Yngwie Malmsteen, Steve Vai, and John McLaughlin because, frankly, their styles seem to have less to do with pure rock-n-roll than that of say, Eddie Van Halen. Anyway, it's a good bet that some of you will consider some or all of these solos the best of all time.

And the winner is:

This meandering monster clocks in at an unbelievable 17+ minutes. Derek and the Dominos was Clapton's vehicle for self- indulgence at the time -- as he "anonymously" fronted this band of musical misfits who gave him plenty of room to show off. Here, "Clapt-out" wails for at least 10 minutes. He struggles with sluggish high-end bends to stay above the din of the clamorous rhythm section. Amazingly enough, the drummer follows Clapton with a seven-minute bashfest of his own! "Let It Rain" makes Bonham's playing on Led Zeppelin's "Moby Dick" seem like a rimshot. This unconscionable crap is truly lackluster compared to Clapton's early live Cream performances, his sessions with Howlin' Wolf, and even his lead work on 1990's Journeyman.

I plan to use weekends on the blog to put up images that are thematically related, are parts of a series, are clear opposites, or are connected in some instinctive way. Tomorrow: The Pianist.

The Guitarist is an abstract that tries to suggest the power of a live electric performance. The blue notes explode in an arc of lift-off before falling into the audience as their orbit decays. The base of the electric guitar can be seen below the notes. The guitarist himself, shades and all, seems to be living out a song by The Fall: "The Man Whose Head Expanded."

I have zero musical talent myself, but I like music very much, and I find it inspiring for art and poetry. I enjoy taxing my speakers while working, and I once wrote a 40-page chapbook while playing Dinosaur Jr. repeatedly over a summer. I am currently blasting out Swervedriver's "Kill the Superheroes" as I type today.

And I'd like to send this entry out to my friend, guitarist extraordinaire Chris Runyan.

Posted by cruelanimal at 2:33 PM