The Hulk as Hamlet 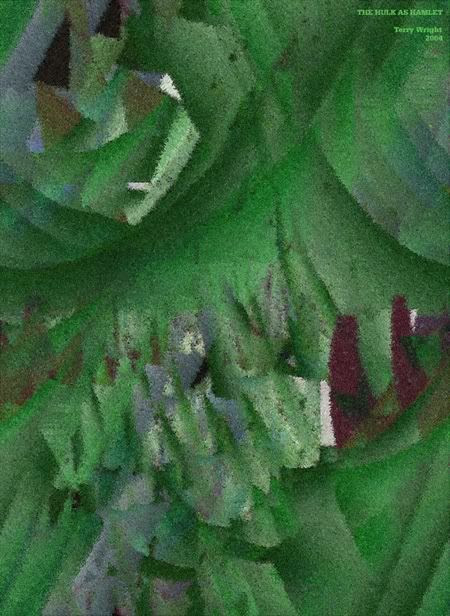 I smell something rotten. Could it be a motif?

From a review of Kenneth Branagh's Hamlet in the Arizona Daily Wildcat:

Branagh chose a clumsy but effective way of defusing this sexual tension by turning Hamlet into a brute who tosses his mother around like a rag doll and screams accusations in her face.

From a summary of Hamlet by Michael Delahoyde at Washington State University:

How does one reconcile the notion of Hamlet as poet with Hamlet as revenge-frenzied brute?

From "On Hamlet" by Samuel Taylor Coleridge:

Man is distinguished from the brute animals in proportion as thought prevails over sense: but in the healthy processes of the mind, a balance is constantly maintained between the impressions from outward objects and the inward operations of the intellect.

I am sickened at the brute world which you are smiling with.

From an analysis of the most famous soliloquy found here:

The "brute fact" of our existence can become a problem for us, an issue, something worth considering and looking at.

From a review in Boulder Weekly of a Denver Civic Theatre production of Hamlet:

Hamlet's "Get thee to a nunn'ry" harangue -- spoken for the eavesdropping Claudius and Polonious -- is coupled with slapping, hair dragging and a brute shove, more suitable to a trailer park than the confines of a Danish castle.

From BookRags.com book notes on Hamlet:

Ophelia laments that her dear Prince Hamlet has transformed into a crazed brute.

Finally, Hamlet himself says to Claudius in Act 3, Scene 2:

It was a brute part of him to kill so capital a calf there.

To smash or not to smash? This be no question. Hamlet smash!!!

This is a very nice image. I like the cubist and watercolor look to it.

I see something more like mountains and forests, like west coast rain forest (Wash. BC). In fact the teepee like structure suggests both a large evergreen and a green mountain. What I like most about your work is the good composition or stucture to the images. Most fractal artwork seems to lack form or focus to it.

I haven't read Hamlet. I read MacBeth in high school and I'm still digesting that one. I put Shakespeare in the same category as tetanus vaccinations. Once every 10 years should be adequate.

I've always felt that no work of art has one clear meaning. I never trusted literature professors eager to tell me what a Robert Frost poem "meant." That's your take I always said in a thought balloon.

So your view of evergreens and mountains is as valid as my Hulk holding the crumbling skull of Yorick.

Maybe this paradox between artistic intention and viewer response is why some fractal artists prefer numerical titles like 000967453. Interpretations are less likely to be biased or even codified. A more subjective title risks nudging viewers into the artist's preferred visual reading.

But, with images as well as poems, I've always enjoyed the added resonance a title can sometimes bring. A thoughtful title can open up suggestions for meaning that would otherwise have remained hidden.

But I think titles are just another option to consider when viewing -- not strict road maps for correctly arriving at the artist's intent. In the end, whatever the prof or even the poet might assert, I have my own opinions about what Robert Frost had in mind.