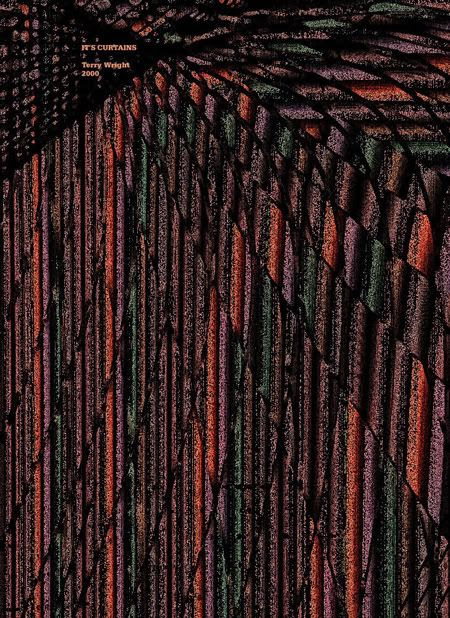 If there's one thing I cannot stand, especially as an artist and writer, it's censorship -- especially when it comes wrapped in the guise of self-righteous "Christian" morality designed to protect the (censor-defined) moral standards of a community. Nothing kills artistic free expression quicker than puritannical, smut-seeking witch hunts committed in the name of protecting the public good.

When Wendy DeVore, the drama teacher at Fulton High here, staged the musical Grease, about high school students in the 1950's, she carefully changed the script to avoid causing offense in this small town.

She softened the language, substituting slang for profanity in places. Instead of smoking "weed," the teenagers duck out for a cigarette. She rated the production PG-13, advising parents it was not suitable for small children.

But a month after the performances in November, three letters arrived on the desk of Mark Enderle, Fulton's superintendent of schools. Although the letters did not say so, the three writers were members of a small group linked by e-mail, all members of the same congregation, Callaway Christian Church [emphasis mine].

Each criticized the show, complaining that scenes of drinking, smoking and a couple kissing went too far, and glorified conduct that the community tries to discourage. One letter, from someone who had not seen the show but only heard about it, criticized "immoral behavior veiled behind the excuse of acting out a play."

Dr. Enderle watched a video of the play, ultimately agreeing that Grease was unsuitable for the high school, despite his having approved it beforehand, without looking at the script. Hoping to avoid similar complaints in the future, he decided to ban the scheduled spring play, The Crucible by Arthur Miller.

How fitting. The witchfinder generals have axed a play that depicts their culture-killing methods at work. Now, because a few contemporary puritans -- one who never even bothered to attend the performance -- have complained, the students of Fulton dare not speak the name of their past production and find their future one deep-sixed. The morality police have made one thing certain. An empty, bare stage offends no one.

And entertains and moves no one either. No souls are called upward by art when the theater is closed or when its company produces only church (or state) sanctioned art.

One wonders if Fulton's Christian crusaders would have complained if a Mel Gibson-tinged passion play had been produced instead of a 50's musical. Now there's some moral entertainment fit for sadists. Whips cracking. Spears lancing. Blood spurting into the front rows as nails are pounded through flesh.

What happened in Fulton stinks of intolerance. The small-mindedness on display is not endemic to so-called Christian schools or communities. Consider this production of The Crucible 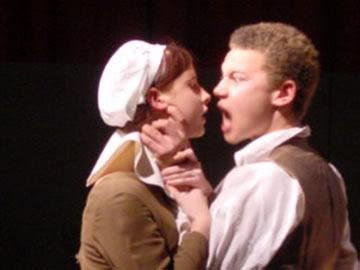 There is either obedience or the church will burn like Hell is burning!
--Arthur Miller, The Crucible

[Image from the drama page of the Emmanuel School]

from London's Emmanuel School -- which, despite its religious grounding, has produced plays by Shakespeare, Stoppard, and Miller. Recent productions include The Crucible (seen above), The Boyfriend, and Sweeney Todd.

But Fulton is not London you say -- and, sadly, how right you are. You know the drill. You know this whole business will end badly in our current stroke-the-base, BushCo-fueled Puritan atmosphere. And, late last week, it did. From the GJSentinel -- "Missouri Drama Teacher Resigns in Play Flap" by Alan Scher Zagier (3-18-2006):

A central Missouri high school drama teacher whose spring play was canceled after complaints about tawdry content in one of her previous productions will resign rather than face a possible firing.

"It became too much to not be able to speak my mind or defend my students without fear or retribution," said Fulton High School teacher Wendy DeVore.

DeVore, 31, a six-year veteran teacher, said administrators told her that her annual contract might not be renewed.

"Maybe I need to find a school that's a better match," she said. 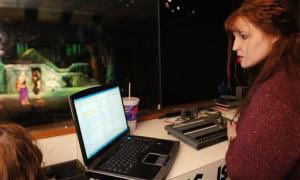 Fulton high school drama teacher Wendy DeVore runs the light board during the dress rehearsal for A Midsummer Nights Dream Monday, March 6, 2006, at the high school's theater in Fulton, Mo.

"We have become a laughingstock," teacher Paula Fessler told The Fulton Sun.

I'm not laughing. I'm sick at heart. And I'm sick of these so-called Christian bullies who insist upon killing all programming offensive to their narrow sensibilities rather than choosing not to watch or changing the channel. A book never read or a play never seen cannot challenge or inspire -- cannot risk offending a few or changing so many for the better.

Then again, maybe the students and community of Fulton do not need to see The Crucible. After all, they are living it.

Posted by cruelanimal at 3:13 PM

hay i dont kill...i know where ur get at

Perhaps, there's more (or rather less) to the story than you think. It's sad, but not unexpected, that you would feel free to pontificate on an issue on the basis of a few news articles that in my opinion really got the story wrong.

First, there was a widespread consensus that "Grease" was unnecessarily vulgar. Devore says she made some changes to accomodate community standards. Why not go all the way and produce a play that one could comfortably take a 12-year old to? The language used in the play was not language that would have been acceptable in class, so why is the theatre any different?

Second, no theatre teacher in a high school should have carte blanche to produce any play that they select. The superintendent told her to produce something less controversial this spring and to postpone "The Crucible" until later. If she had simply done that and kept her mouth shut, there would not have been a story here. Instead, true drama queen that she is, she relished the role of the martyr and played it to the hilt. It's sad that so many people have bought her act. I will give her credit, though, it's the finest Wendy Devore production I've ever seen.

Finally, this is not a debate over free speech as much as many would like you to believe. Rather, it is a debate over judgment. One side has asked people to exercise good judgment, the other side is just being judgmental.

Anon: Well, the "few" news articles have actually been quite numerous -- and all have been consistent in reporting the events as a case of apparent censorship. Why am I wrong to "pontificate" on the matter but you are free to pontificate without question?

Art is tricky. What offends you as bad judgment might be a sublime epiphany to me. I certainly never argued that high school drama teachers have carte blache when selecting performances. But it's not like DeVore was staging I Am Curious Yellow. Both Grease and The Crucible are respected, critically acclaimed literary works. Both of these plays have been performed in hundreds of high schools in small towns like Fulton. How strange that Fulton is the exception -- the one community with sufficient insight to discern that its community standards should trump the plays' artistic merits.

And why stop at 12-year-olds? What if some audience members want to bring their 5-year-olds? Should the play then be further watered down to accommodate pre-schoolers? Did DeVore not make some textual changes and note that Grease had mature themes? Should someone bring a 12-year-old to see The Crucible? Who's exercising bad judgment now?

You seem a bit of a drama queen yourself, Anon. Since you won't reveal your name, I guess we'll never know if you're one of the handful of Callaway Christian Church members who initially complained and constituted a "widespread consensus." You say that if DeVore had just "shut her mouth" there would have been no story. But worms can easily turn. I'd bet if church members (like you?) had kept their mouths shut, then there would have been no incident for public consumption and pontification.

And that's the difference between us, Anon. I don't want anyone to keep his or her mouth shut. I'm glad you didn't clam up but instead wrote to explain your take on this business. Thank you. And I'm glad I don't have to shut up either and can openly respond to you. But, under the guise of exercising "good judgment," you have no qualms about preferring DeVore just shut up.

Your remarks here only reaffirm my initial opinion. It looks to me like a self-righteous few have proclaimed themselves the town's moral guardians and have imposed their own value judgments to restrict free expression. So, I do agree with you on one point. One side of this debate is indeed being very judgmental.

It's too bad the students and other citizens of Fulton won't be seeing The Crucible anytime soon. One of its central themes is that intolerance masquerading as piousness can destroy communities.