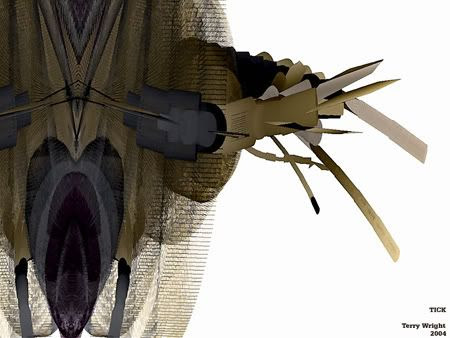 Despite folklore, the proper way to remove a tick is using a tweezers and gripping the tick as close to the skin as is possible. The use of a smoldering match or cigarette, nail polish, Vaseline, or kerosene should be avoided, since they may irritate the tick and cause it to behave like a syringe, injecting organism-bearing bodily fluids into the wound.

Okay. Check. Now what other bloodsucking creatures behave in a similar manner and should be promptly removed? 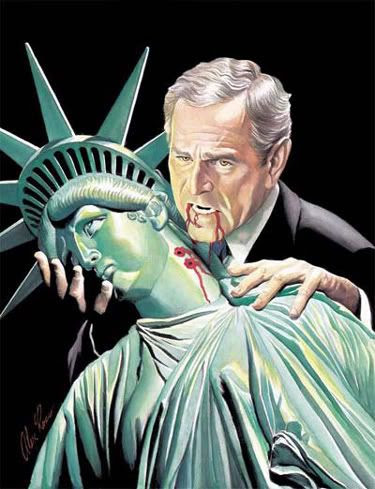 Yet who would have thought the old [wo]man to have had so much blood in [her]?
William Shakespeare, Macbeth, Act V, Scene I

And what's being sucked dry? America the Beautiful. The very idea of what our nation is and should be.

From the Village Voice -- "The End of Democracy" by Rick Perlstein:

Ever since the days of Joe McCarthy, the claim that a made-up charge by one side is no longer an outrage if the wronged party gets a chance to refute it has been an easy refuge for journalistic scoundrels. When Republicans accused someone of being a Communist, newspapers reported it, true or not; then they reported the victim's outraged denials, the day's work done -- no matter that the person's life might now be ruined by the merely invented accusation. With a setup like that, the side willing to say anything to win will win every time.

[Jeff] Greenfield disagrees. "McCarthy won for about two years, and then the tide turned," he says. Nowadays, it would happen even faster, what with blogs and all. "When somebody starts really playing with the facts, there are so many people on every side of the issue ready to jump on you," he says. "Call me an optimist."

I call him an idiot. This is a country where 42 percent of Americans believe Saddam Hussein was behind the 9-11 attacks, where telling lies before the truth has time to put on its shoes -- lies that won't have time to get exposed before the votes, whether the electorate's or the Supreme Court's, get counted -- has been Karl Rove's modus operandi since he stole the election for chairman of the College Republicans National Federation in 1973. Punks like Greenfield are Rove's best friend: He's already decided in advance that both sides are equally bad.

It's hard to take any protestations of good faith from a conservative seriously these days.

"Evangelicals are trained to recruit from the cradle," observes one witheringly astute expert on Christian conservative culture. Call this informant Deep Faith: A Ph.D. student in divinity, he grew up in the rural South in an intensely pious Pentecostal community and still believes its creeds after five years at an Ivy League university. He has not, however, kept faith with his ministers' injunction that evangelicals must devote themselves to building a Republican America. The notion, in fact, horrifies him. In college, the first time he spent extended periods outside evangelical circles, he says, "I realized the main thing that separated us evangelicals from them was that they believed in dialogue and compromise. And we believed in taking no prisoners. . . . Democracy can't function in an environment where one party will not sit down and play by the rules."

Those who are willing to do anything to win can win.

George Bush is not a fascist. He really isn't. And thank goodness for small favors. For what if he were? The people who run Democratic campaigns might dismiss his suspension of constitutional provisions as yet another boring old "process story," not fit to upset the voters with. The talking heads would assure themselves that the truth would out in a couple years anyway-- faster still, now that we have the Internet.

Many among our Republican rank and file would have a hard time noticing anything amiss. These are the people who can say, as Richard Viguerie told the Voice, "If there's vote suppressing, nine times out of 10 it's going to be Democrats."

A coup? Deep Faith is convinced some might even welcome it. "It makes me wonder, if something really bad happened, and the Bush administration was able to have a coup and be in permanent charge," he tells me, sinking into his living-room couch, scaring the hell out of me, "who among my folk would seriously protest, if they could get a slice of the pie? 'We could go in there and reverse all this judicial precedent we don't like!' "

That Kingdom of God they keep talking about, he reminds us, the hunger for which is now the fuel of the Republican engine, "is not a democracy."

There's a Watergate every day in BushCoLand. And a public perception of journalistic balance (like bogus claims that Dems took bribes from Abramoff or stacked deck televisual yin yangs like wimp Colmes complementing pit bull Hannity) just allows each fresh outrage to play out under the radar. Fox News spins. Nancy Grace chatters on about missing white women. Curious minds want to know who fell down in the Winter Olympics or during Dancing with the Stars?

And look how hard all of us have taken a tumble under the Madness of King George. Here's something I wrote earlier this week in a comments thread over at Shakespeare's Sister:

What's truly frightening is that each new outrage seems normal and is met with a shrug of the shoulders.

Take yourself back to the late 90s at the height of Blowjobapalooza. If someone had said to you that in a few years the United States...

*would not honor the Geneva Convention.
*would hold prisoners indefinitely without charging them.
*would openly advocate torture to the point where the president would threaten to veto anti-torture legislation.
*would set up gulags in foreign countries and fly prisoners there to more aggressively torture them.
*would launch a first-strike invasion of a non-threatening nation based on manipulated intelligence and lies.
*would force National Guard reservists into combat situations.
*would allow the president to admit if not brag about spying on citizens without any judicial restraints.
*would allow federal agents unfettered access to library and bookstore records and to search engine searches.
*would not blink an eye when an administration openly paid "journalists" to ask softball questions and publish articles favorable to the ruling party's policies.
*would allow a Pravda-like television network to blatantly champion administration policies and daily make unchallenged idiotic statements like civil war could be a good thing.
*would not challenge a president who primarily speaks to only pre-screened audiences partial to his political agenda.
*fill in other BushCo atrocities here.

...well, what would you have said? Something like you're out of your fucking mind or get the torches and pitchforks out?

You can see how far we've fallen. And we still have three years left -- longer than JFK's time in office.

Do not doubt that Rove and his minions will do anything to keep power and understand how to stroke the fanatics in the GOP base. If Bush is not a fascist, as Perlstein notes, our president does consistently show signs of craving a kingdom. He and his faithful will leave no throat unsucked while burying the Constitution and draining our nation dry. You want to pull the parasites out -- heads and all -- with your zirconium-plated tweezers? Speak up and vote against them -- each and every one.

And take a page from their playbook. Work to avoid the next overt coup and do whatever it takes to ensure that all votes are Diebold-free and fairly counted.

Posted by cruelanimal at 7:47 PM

Heretik: Thanks for visiting. I visit your blog often.

Neil: I love that pic, too. I'm pretty sure it first appeared in the Village Voice.