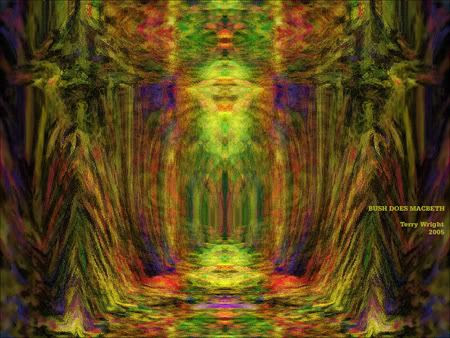 ...it is a tale
Told by an idiot, full of sound and fury,
Signifying nothing.
--William Shakespeare, Macbeth

Does the Leave It to Freeper crowd have enough ants in their pants over Cindy Sheehan? Mrs. Sheehan, whose son Casey was killed in Iraq last year, is holding a vigil outside the War Prezdent's ranch in Crawford, Texas, while his motorcade speeds by her in the course of his current extended vacation. Mrs. Sheehan would like the president to come out of the compound and meet with her. She has a very simple question she'd like to ask him: What did my son die for?

Personally, I'd like to hear the president tackle that one -- without his usual rah-rah, filtered audience and radio wire snaking up his back. Polls suggest a growing majority of Americans also wonder why the nation's sons and daughters, spouses, grandchildren, and friends are dying.

But, in the dark heart of Freeperville, you'd think Mrs. Sheehan, well, hates America...or something. Here's what Erick had to say over at Red State.org:

Cindy Sheehan's son was killed in Iraq. She's a grieving mother. Last year, the President met with Mrs. Sheehan, comforted her, and grieved with her. At the time, Mrs. Sheehan thought the President had done well and appreciated him. Enter August, no major news, and a media still smarting over the President's re-election despite everything they threw at him. Cindy Sheehan returns entering stage right -- this time a left wing media whore in the form of a grieving mother.
[...]
The remarkably humorous bit of all of this is that while Mrs. Sheehan is using the body of a dead solider to get her fifteen minutes of fame, Mrs. Sheehan is letting that body be used by Michael Moore, Code Pink, the DNC, and the media to extend their fifteen minutes of fame. The only one in this orgy of anti-war sentiment who has not spoken is Casey Sheehan, who gave his life that Iraq might be free. Whether he believed in the cause or was just doing his job, we will never know. But he did not die in vain. Iraq will be free. And in September we will all go back to forgetting who Cindy Sheehan is, not that we ever cared to begin with, and we will remain in Iraq.

Talk about empathy. So grieving mothers have no right in our supposedly free society to ask questions of those who placed their children in harm's way without being called a whore? I won't provide a link to such callousness, but if you'd like to write Erick to ask when he is stepping out from behind his keyboard and enlisting to fill the slot vacated by Casey Sheehan, you can reach him at: erick@erickerickson.org.

Meanwhile, another sensitive soul at Instapunk had this to say:

Yes, it is a terrible thing to lose a child. But I'm getting tired of hearing the rote assertion that it's the worst thing that can ever happen to you, you never get over it, and no one who hasn't had the experience can ever understand. It's as if this category of event, "lose a child," represents some kind of emotional tree-line which, once passed, automatically elevates a person into a new state of existence from which ordinary mortals are excluded. It's the Skull & Bones of parenthood, an elite membership which confers extraordinary privilege and exemption from all merely human judgment or criticism.
Pardon me, but that's a crock. On several levels. Anyone who has lived more than a few decades comes to understand that life is largely about loss. The longer we survive, the more we lose: grandparents, parents, friends, lovers, wives, husbands, family, pets, and any number of dreams, possessions, and ideals, including -- for many -- faith, hope, and love. The whole idea that there is a Publisher's Clearinghouse Jackpot of Loss is absurd and demeaning to the human spirit.

No, pardon me, Instapunk, but that's a crock. I've seen my father, sixty years after surviving the hell of Peleliu, tear up while remembering the friends he lost. You never get over such loss. And I'd bet you your witless jackpot analogy that losing a child makes such loss immensely worse -- and intensifies the need and drive to find some meaning in such a death. That's all Cindy Sheehan wants. Some sensible explanation that gives her son's death meaning. Apparently, you need more than a few decades (or a five-week vacation) to understand what it means to lose someone you love. It's not a thought problem, like whether to buy Salsa or Nacho Cheese Doritos; it's an ache and sadness you live with every day. By the way, I think it's a safe "rote assertion" you're a big backer of the war, and I understand the Sheehan family left a vacancy that needs filling. When are you shipping out? If you'd like to ask Instapunk, who understands so well that life is largely about loss, when he's trading in his keyboard for his desert fatigues, write him at: punk@instapunk.com.

And, now, consider more media-visible and caring types, like Michelle Malkin, known for her poise and magnanimous decorum 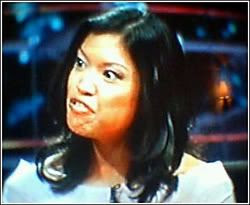 who refers to Sheehan and her supporters as "the grief pimps." Good to know that Wingnut Central never resorts to the ad hominem level by, say, asserting a grieving mother is a hooker for exercising freedom of speech.

So, what's giving the Wackosphere such a wedgie? I think Cindy Sheehan has simply asked a question weighing on the minds of many Americans. Why, really, truly, are our loved ones dying in Iraq?

The rationale from BushCo has been shuffled more often than playing cards at a casino. WMDs? Smoking mushroom clouds? Replacing evil dictator? Flypaper theory? Bringing freedom? Fighting terrorism (er, global insurgency...or whatever)? Spin the wheel. Nobody knows. I think people would feel better if Bush came out and flatly said we invaded Iraq to grab all the oil and maximize profits for Halliburton. That's at least more concrete than constant abstract evasiveness. And no matter how granite-jawed, gut-trusting, turning-the-corner-of-the-last-throes Bush remains with his stubborn resolve, he still has to be resolved about something. And, so, please, just tell us, without equivocation, straight out -- why are our soldiers, including Mrs. Sheehan's son, dying in Iraq?

Bush could make this whole PR fracus go away by meeting with Mrs. Sheehan. Ask her up to the ranch for some sweetened tea and pretend to listen while daydreaming of clearing brush. Such a gesture would be a cakewalk for former presidents like Carter and Clinton and Reagan. But, under the guise of not showing weakness, Bush won't. Moreover, he can't. He doesn't have the skills. Wouldn't it be refreshing to, just once, see something genuine from our president? His past sympathetic expressions for the fallen dead clunk on the ear with the same dispassionate tone as remarks like Got wood? and You forgot Poland. There's an awkwardness around the edges -- as if you expect a smirk-tinged Now watch this drive will follow each statement.

So, why won't Bush meet with Cindy Sheehan?

Maybe because he doesn't do spontaneous. Removed from his pre-screened throngs, watered-down Gannonized press conferences, and eventless photo ops, he's a stumbling, bumbling stiff. To actually converse in real time with real people would run the risk of everyone discovering that, at the core, there is no there there. And, then, finally, the public's increasing perception, borne out by sagging poll numbers, will crystallize. Bush is an empty parenthesis. He signifies nothing.

Or, I suppose there's another possible answer. He just doesn't give a shit.

Posted by cruelanimal at 1:57 PM

Okay- you are a wonderful writer...and I just knew some blogger would find the Shakespeare in This ...and your art is amazing- I would buy it...The Gannonize phrase is too perfect.....keep blogging and blogging for Cindy...please go to my blog if you have time- http://watergatesummer.blogspot.com/ and read Letter to King George on Day 11 of the Vacation....thanks

"No, pardon me, Instapunk, but that's a crock. I've seen my father, sixty years after surviving the hell of Peleliu, tear up while remembering the friends he lost."

Another wag who can't read. You just made my point, unless your father is tearing up over his lost children at Peleliu.

Wha would you idiots do without the chickenhawk gambit? But more importantly, what would you do WITH it? Take away the female vote entirely? Turn the country into a military dictatorship run by the 200,000 or so males who have combat experience?

Get yourself another argument, moron. One that makes some sense, at least. And by all means, hand out my email address to all your imbecilic friends. It's punk@instapunk.com. I'm happy to laugh at them by email just I laugh at you in your comment box.

You seem a little defensive.

And refresh my memory again exactly how you refuted the "chickenhawk gambit" in your comment above?

Oh, right. You, and other yellowphants like you, can't serve because the nation would run the risk you'd all come back as combat-addicted flashback freaks. Women's rights would be trampled by your shell-shocked selves, and democracy would die when you hormonally addled vets stage a mass market military coup.

But, Instapunk, why not just fight such socially retarded developments with your fully loaded keyboard -- just like you do now? Isn't that your current weapon of choice to keep fascism at bay and freedom reigning?

I've seen your picture. You look to be of what used to be called "draft age." Plus, you claim to be wise enough to really understand what loss is -- including dictating Cindy Sheehan's feelings for her dead son. So I say lose your comfy lawyer job, lose your force field keyboard, and haul your ass over to Iraq to replace the gap left by Casey Sheehan.

It's the war you want, Bob. Get your gear as well packed as your convictions. You can laugh at morons like Mrs. Sheehan and me just as easily while you're walking point and poking the sand for roadside bombs.

Enlist to serve in the war you are stoking. Otherwise, your cheap name-calling-as-discourse and pseudo-philosophizing on loss have no teeth. They are excuses allowing you to shoot off one thing: your mouth.